Break in Case of Arts Emergency

Class, ethnicity and disability are still major barriers to young people gaining entry to the creative industries, and the pandemic has heightened gaping inequalities in the creative pipeline. Given the last year, the term "Arts Emergency" has never been more true, nor more urgent:


"We have a responsibility to call out the lack of representation within the cultural and creative industries and to help level the playing field for people in the UK." - Yomi Adegoke, Slay in Your Lane

LONDON, Oct. 14, 2021 (GLOBE NEWSWIRE) -- Celebrities, Arts organisations, creative companies and universities around the UK have today joined forces as part of a campaign that calls on those working in culture to help open the doors for marginalised young people struggling to break into the Arts.

Celebrities including Jack Dee, Katy Brand, Michael Sheen, Neil Gaiman, Jenny Eclair and Chris Addison have joined an the #BreakTheGlass online campaign calling on those working in culture to help open the doors for marginalised young people struggling to break into the Arts.

The comedians and actors were amongst hundreds of those sharing the names of the people who helped them to make their breakthrough and encourages their followers to sign up to share their time or donate to Arts Emergency, the award-winning mentoring charity and support Network, and open the door to young Talent - just £10 a month can support a young person's place on the scheme from 16 to 25 years of age.

A giant 'Break in Case of Arts Emergency box featuring devastating statistics on the state of the UK creative workforce was placed outside venues around the UK to raise awareness of the barriers that young people face in joining the Arts, and the disastrous impact losing a generation of young talent will have on UK culture.

This campaign was created by Arts Emergency, the award-winning mentoring charity and support Network. The box also displays examples of creative work from Arts Emergency's young people, Jannell Adufo, Maïs Bouteldja, Helen Hale, Gwent Odai and Sam Oddie, showcasing some of the incredible raw talents which are at risk of being excluded from the arts. The accompanying text calls for viewers to help 'break the glass' by joining the Network.

The box launched at the Museum of London, where the young people unveiled their work before arriving at its new home in Liverpool at the World Museum in time for National Museums Liverpools official 2022 launch event.

Organisations lending their support to the campaign include The BFI (British Film Institute), University of the Arts London, ATC Management and ATC Live, the Eden Project, Framestore and Company 3, Get Up, Stand Up - The Bob Marley Musical, Avalon and The Agency, Rankin, Whitworth Gallery, FACT Liverpool, Ian Pons Jewell, Vertigo Releasing, Powster, DawBell, TAKEOFF, Sarah Wigglesworth Associates, Strawberries and Creem and FCB Inferno. The activation is also being supported and shared by Linkedin.
Several of the organisations that have signed up to support are also opening their doors in practical ways to the young people Arts Emergency work with. These include promoting the charity's action sheet on supporting young people and good working practices, virtual open days to understand the various roles available in advertising plus three paid summer internships with FCB Inferno, artist workshops to showcase the music ecosystem and range of behind-the-scenes roles available from ATC Management and ATC Live, and four paid traineeships with 'Get Up, Stand Up! The Bob Marley Musical. Avalon and the Agency offer mentorship opportunities, three paid internships each year and actively recruit for full-time staff from the charity.

"Our future cultural landscape is in danger of being populated exclusively by the children of the wealthy and well-connected. I love Arts Emergency because it works to bridge this gap. To create the opportunities that have been taken away for the non-wealthy." - Julie Hesmondhalgh, actress: Coronation Street, Happy Valley, Broadchurch

Arts Emergency began life as a small mentoring project in Hackney set up by comedian Josie Long and activist Neil Griffiths to help young people affected by austerity and rising tuition fees. Arts Emergency has since grown into a charity with bases across the UK and a community of thousands of volunteers, supporting young people aged 16-25 in most need of the support of a mentor. This includes young people from working-class backgrounds, disabled people, carers and young parents, refugees and asylum seekers, those in care and care leavers, people with learning disabilities or special educational needs, and people from Black, Asian or minority ethnic backgrounds.

The charity relies on individual donations and those already in the arts and humanities opening their networks and knowledge up to young people. Arts Emergency is now at a crucial turning point, and with increasing demand for its services, the organisation has set out a new vision to support 2,500 young people nationally by 2025.

In September, the All-Party Parliamentary Group (APPG) for Creative Diversity review showed that the creative economy is losing out by not representing the huge range of diverse talent that exists in the UK, particularly in senior decision-making roles and key creative professions. Arts Emergency exists to level the playing field and is calling on people who work in the creative industries to open the doors of their network for a new wave of cultural creators. The statistics shown in the campaign aren't just a problem for underrepresented talent trying to get into the arts. It's a problem for our culture as a whole.

The campaign was created pro bono by creative agency FCB Inferno, the agency behind work such as Sport England's 'This Girl Can' and the Premier League's 'No Room for Racism'. The launch campaign includes press ads and a series of short social documentaries to support the launch, with creative industry names including poet Raymond Antrobus and artist Mark Leckey sharing how they broke into their profession, exploring their struggles along the way and encouraging audiences to help more young people find their way into the arts. The organisation's youth collective is also launching a podcast, Crash Culture, in which they interview people, including writer Kit de Waal and researcher/activist Rianna Walcott about social justice and the cultural industries.

We need to actively remove elitism and nepotism in our creative industries, and instead create diversity in race, gender, class and age. This isnt needed just for fairness, but because it makes the work we create significantly better. At RANKIN, we say that we want to change the world, and its projects like Arts Emergency that really will change the creative one. - Rankin

Katy Wright, Managing Director at FCB Inferno said: Having worked alongside Arts Emergency for the past four years, weve seen first-hand the impact of their mentoring and support for marginalised young people most affected by rising tuition fees and cuts to the arts. For these young people to follow their passions and navigate their way into the creative and cultural sectors is a tough road. And for many, it seems impossible to follow. But if someone can open the door and show them the way in, it could mean a breakthrough that changes their lives forever.

Neil Griffiths, Founder of Arts Emergency said: "No matter what you've achieved, someone at some time gave you a leg up, and Arts Emergency is thousands of people from across the cultural and creative industries doing just that for the next generation by donating money, time and contacts to help them get in and get on."

Notes to Editors
The National Gallery is not affiliated with the activation and has been chosen to act as a globally recognisable symbol of the UK arts industry.
Quotes from our supporters can be found here:
Supporter quotes
Young Talent art and bios

ABOUT ARTS EMERGENCY
Arts Emergency is an award-winning charity founded by comedian Josie Long and activist Neil Griffiths. Since 2013 they have provided expert mentors, guidance and opportunities to support underrepresented young people into higher education and creative careers.
Arts Emergency helps young people without connections follow their passions and navigate their way into the creative and cultural sectors. The charity provides 16-25-year-olds with a combined long-term programme of mentorship, networking and real-world opportunities. Young Talent only need to ask and they can deliver. Whether it's a paid internship, CV advice or audition coaching, our volunteers will step up to help. Their support Network is made up of over 7,000 cultural professionals who've offered to share crucial gateways into hard to crack industries like TV, publishing and architecture.
Arts Emergency supports young people aged 16-25 who most need the support of a mentor. This includes those from working-class backgrounds, disabled people, carers and young parents, refugees and asylum seekers, those in care and care leavers, people with learning disabilities or special educational needs, and people from Black, Asian or ethnic minority backgrounds.
Network members bring a wealth of experience across the fields of TV, film, music, art, fashion, academia, journalism, publishing, design, and theatre. High profile supporters include fashion historian and BBC presenter Amber Butchart, comedian and actor Julie Hesmondhalgh, author and journalist Reni Eddo-Lodge, musician Kae Tempest, writer Neil Gaiman and comedians Nish Kumar, Stewart Lee and Sara Pascoe.
https://arts-emergency.org

FCB Inferno, based in London, is one of the world's leading creative agencies and works with a diverse mix of both local and global clients.
We create ideas that drive business today and build brands of tomorrow. Ideas that endure and are Never Finished. The work we do is both highly commercial and purpose-driven for some of the world's most iconic brands, including creating the acclaimed 'This Girl Can' campaign for Sport England.
Our creativity and effectiveness have been recognised at numerous global award shows for solving clients' business problems in innovative ways. This includes multiple Grands Prix at Cannes, D&AD White and Yellow pencils and even a BAFTA nomination.
We are part of the FCB Network with over 8000 employees across 80 countries. FCB was named Global Agency Network of the Year by Adweek 2020 and Network of The Year at the Cannes International Festival of Creativity in 2021. We were also awarded the inaugural One Show Fusion Pencil for diversity and inclusion, the Good Report's #1 campaign and Network, and a Grand Prix in e-commerce at Cannes - and we're just getting started.
Contact:
CC Clark
cc.clark@fcbinferno.com
A photo accompanying this announcement is available at https://www.globenewswire.com/NewsRoom/AttachmentNg/8b151a3d-e977-4a90-8353-a13e23b833d1
__________________________
1 https://www.pec.ac.uk/assets/publications/PEC-report-class-in-the-creative-industries-FINAL.pdf
2https://createlondon.org/wp-content/uploads/2018/04/Panic-Social-Class-Taste-and-Inequalities-in-the-Creative-Industries1.pdf
3 https://www.pec.ac.uk/assets/publications/PEC-report-class-in-the-creative-industries-FINAL.pdf
4 https://www.suttontrust.com/our-research/elitistt-britain-2019
5https://createlondon.org/wp-content/uploads/2018/04/Panic-Social-Class-Taste-and-Inequalities-in-the-Creative-Industries1.pdf
6 https://www.pec.ac.uk/assets/publications/PEC-report-class-in-the-creative-industries-FINAL.pdf
7 Orian Brook, Dave O'Brien and Mark Taylor, Culture is bad for you. Inequality in the cultural and creative industries, 2020. (p.61)
8 https://osf.io/preprints/socarxiv/7njy3/ & https://createlondon.org/wp-content/uploads/2018/04/Panic-Social-Class-Taste-and-Inequalities-in-the-Creative-Industries1.pdf 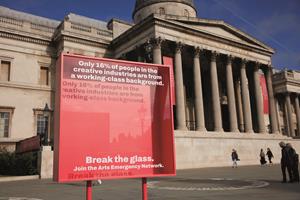 MYSTIQUE CASA PERLA BY ROYALTON TO DEBUT IN VARADERO, CUBA